Read more
Categories: Groups Writers
Feb
24
Sat
Writing Workshop: World Building
Tickets
Feb 24 @ 10:00 am – 12:00 pm
When writing fiction, particularly genre fiction, one of the greatest hurdles a new writer faces is developing the world in which their story takes place. Whether it mirrors the real world or is built from scratch, is grounded in history or has a timeline of its own, the writer must be their own architect of the setting their characters will exist in and that their readers will accompany them in exploring. Join us for a discussion on establishing your fictional world, from geography and history to physics and magic. Bring your questions, roadblocks, and challenges on fictional world-building.
Matthew Phillion is the author of the young adult adventure series, The Indestructibles. He writes in a variety of genres. His screenwriting and directing debut, the romantic comedy Certainly Never, premiered in 2013 at the Massachusetts Independent Film Festival, was nominated for five awards including best screenplay and best New England film. An active freelance writer, Phillion continues to write about both local issues and the medical industry as both a journalist and newspaper editor.
Read more
Categories: General Writers
Feb
27
Tue
Incessant Pipe Poetry Salon
Tickets
Feb 27 @ 7:00 pm – 9:00 pm 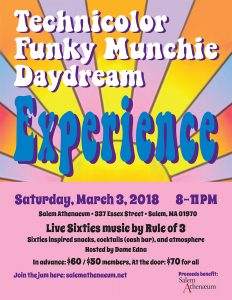