Generations of Americans have experienced frontier life through Laura Ingalls
Wilder’s beloved Little House on the Prairie books and the television
series based on them. Storyteller and actress Sheryl Faye will bring the
real Laura and her pioneering adventures to life at the Salem Athenaeum
in a family friendly program.

Join us for everyone’s favorite prairie girl! See how this little girl grew up
to be a famous writer and share her stories with the world! 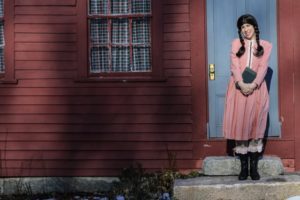 In 2011, Peter Hitchens, an admirer of Walpole, though not an uncritical one, wrote:

Henry James and John Buchan praised him. Joseph Conrad, T. S. Eliot and Virginia Woolf were kind about him. What’s more, his books sold enormously well on both sides of the Atlantic, he was knighted, and he became very rich … Yet now he has vanished completely, his books not even to be found on the back shelves of most second hand shops, dismissed as “unreadable.”

If one is curious about how such a thing could happen, check out one of Hugh Walpole’s novels at the Salem Athenaeum and join the discussion of Hugh Walpole’s work at the Reappraisal Reading Circle’s meeting on Monday, May 14 at 7 pm. If Hugh Walpole was, as has been said, the most successful romantic novelist of his time, is it the genre that has failed him, or is it his style and artlessness, or the sensibilities of our time? Of the nearly 40 novels Walpole wrote, few titles have any name recognition at all today, but little girls have been named Judith and Vanessa for his characters. Colleges have retained his books – colleges and the Salem Athenaeum. Walpole wrote psychological novels, children’s stories, historical fiction (Herries Chronicles), regional fiction, and gothic horror stories (Portrait of a man with red hair, and The killer and the slain), detective stories (Behind the Screen) and biography (Anthony Trollope). Lately, it seems that some readers who report to Goodreads have discovered Walpole. How will the Athenaeum readers respond to Walpole at the meeting on May 14?

Reappraisal Reading Circle meets to discuss the works of prolific, popular authors of the past whose works are held in quantity by the Athenaeum. All are welcome to participate!

The building will be open from 9:45-12:00 every Tuesday (unless announced otherwise). Feel free to come by and write in a quiet peaceful setting.

Second in a series of three lectures. Tonight’s topic is Dante Gabriel Rossetti.

For those who wish to read in preparation for the lecture, Dr. Schopf suggests reading the following short poems by Rossetti. The paintings can be found on the same website as the poems: www.rossettiarchive.org/exhibits.
“The Blessed Damozel”
“The Song of the Bower”
“Body’s Beauty”
“Soul’s Beauty”
“Astarte Syriaca”
“The Day-Dream”
“Found”
“The Girlhood of Mary Virgin” or “Mary’s Girlhood”(2 sonnets)
“Proserpina”
“Venus Verticordia”

In this three-lecture series, Dr. Sue Weaver Schopf will explore questions that have often been asked in studies of the sister arts: What can poetry express that painting cannot? What can painting express that poetry cannot? And what are the artistic possibilities when painting and poetry work in tandem to convey ideas and express emotion?

William Blake and Dante Gabriel Rossetti were both painters and poets, who experimented with the potential of each medium. But when they began to illustrate their poetry, they discovered the full range of expression possible when the visual and verbal arts function as compliments to each other.

Among the many poems of the 19th century, none were more frequently illustrated than those by Alfred, Lord Tennyson. What drew artists to his poetry, and how did their paintings enhance or further elucidate the author’s works? These interesting dynamics will be the subject of separate lectures on April 20 (Blake), May 16 (Rossetti), and June 6 (Tennyson). A list of poems to be considered will be made available before each lecture.

Sue Weaver Schopf is Distinguished Service Lecturer and retired Associate Dean at the Harvard Extension School. She has served on the board of the Salem Athenaeum and is a member the Program Committee.

An evening of Jazz with Howard Paul & Larry Baione at the Salem Athenaeum:

Join us for a delightful evening of jazz (with a brief talk on jazz history & the Archtop guitar). As a nationally recognized jazz guitarist Paul juggles 150+ live performances, dozens of university lectures, & studio work.  He is President/CEO of internationally renowned Benedetto Guitars. Howard began playing at 4 & professionally at 13; by 17 he was teaching at a local College & performing with a popular trio. He has performed with an extensive list of legends including guitarists Bucky Pizzarelli, Jimmy Bruno, Joe Beck, Howard Alden, etc. He has shared the stage with Grammy winners Tom Scott, Mark Egan, Bob James, Laurence Hobgood, Gary Novak, Bob Sheppard, Gregg Field as well as 4-time Grammy Nominee Joey DeFrancesco (Hammond B3). Howard was inducted into the Coastal Jazz Hall of Fame in 2011.  His CD releases include “The Presidents” with Jody Espina; “New Adventures with Tony Monaco” 2014; “Just Friends with Bob James” 2011; & “Jammin’ at the Jazz Corner with Ali Ryerson Trio” 2009.

Larry Baione has been Chair of the Berklee College of Music Guitar Department since 1990, & faculty since 1974. He has studied with Lenzy Wallace, Mick Goodrick, Bill Harris, William Leavitt, Bucky Pizzarelli & Jim Hall. His B.A. is from Berklee & M.A. from New England Conservatory.  After graduating Berklee, Larry was principal guitarist in the DC Army Band.  He performed in the White House, throughout the US & toured South America as the State Department Jazz Ambassador. Larry is author of the Berklee Practice Method for Guitar. He performs in numerous jazz, concert & recording ensembles, from solo guitar to big band. He continues to perform & give clinics throughout the world. His recent recording “Playing Time” consists of original compositions & standards in a trio setting.

The building will be open from 9:45-12:00 every Tuesday (unless announced otherwise). Feel free to come by and write in a quiet peaceful setting.