Reappraisal Reading Circle is an open meeting discussing the works of a prolific, popular author of the past whose works are held in quantity by the Athenaeum.  Participants are encouraged to read any work by the selected author to contribute to the discussion.  Even if you haven’t read any of the books you are welcome to attend. Meetings are usually held on the 3rd Monday every other month but occasionally are held on Fridays in the event of a Monday holiday.

When Emily Dickinson died in 1886, she was unknown outside the small circle of her family and friends. Her sister, Lavinia, promised she would burn all of Emily’s papers once she was gone. But Lavinia could not bring herself to destroy the remarkable cache of nearly 1,800 poems she discovered after Emily’s death. Instead she sought an editor, a person who knew and loved Emily, who could decipher the confusing manuscripts and put them into publishable form. Mabel Loomis Todd was that person. Though Emily and Mabel never met face-to-face, the friendship they had built through correspondence afforded Mabel the insight she would need as she and her daughter Millicent Todd Bingham built Emily’s literary legacy.

Julie Dobrow, a journalist and a professor at Tufts University and author of AFTER EMILY, a new biography that weaves together the stories of Emily, Mabel, and Millicent using hundreds of primary source materials, many of which have never before been quoted in published works. Dobrow pored over hidden diaries, long-lost letters, and rarely seen documents. Her work allows readers to hear the thoughts, hopes, and sorrows of these women in their own words—from the unforgettable feuds between Mabel and members of the Dickinson family, to Millicent’s struggles growing up steeped in her mother’s obsession with editing Dickinson’s works, to their own close but complicated connection.

This group is for people who are writing, or wish to write, memoirs. It will not be a class, but rather an opportunity for participants to share and discuss each other’s work, and to offer guidance, advice, and companionship through the memoir-writing process.

Get a jumpstart on your summer reading! 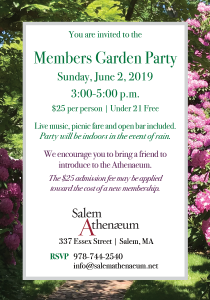