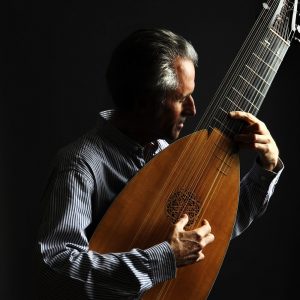 The Cambridge Society for Early Music presents lutenist Hopkinson Smith for a concert of inventive music, which traverses realms of melancholy, solace and merriment, with works of Dowland, Holborne, Johnson, and Byrd.

Hopkinson Smith is a world-renowned performer on early lutes and guitars. A Harvard graduate, he studied in Catalonia and Switzerland, and in 1974 he was a co-founder of the famous ensemble Hespèrion XX in Basel. He has focused on solo music since the mid-1980s. His splendid series of more than 25 CDs, including lute arrangements of Bach’s works for solo strings, have been showered with praise.

His recent CD, fancifully entitled “Mad Dog,” is devoted to the Golden Age of Elizabethan lute music. The BBC called it “mesmerizing,” and it won a Diapason d’Or award.

Each holiday break, the Clothing Connection gifts a book to the children served during the winter season. These books, based on the students’ reading level and interests, are selected by the reading specialists at Carlton, Bates and Saltsonstall schools.

Please join the Clothing Connection for an afternoon of winter-themed poetry read by local writers at the Salem Athenaeum on Sunday, December 9 at 4 pm. Books will be available for “purchase” at the event. Alternatively, attendees can make a monetary donation to be put towards book costs.

Coffee and cocoa will be served.

On occasional first Fridays, the Night Owls will convene. Tonight’s theme is Prophecies, but we cannot tell what they are yet!

We invite you to bring games to share, a topic to discuss, or to just show up and join the fun. It’ll be a hoot!

Historical fiction is popular, despite the fact that it is often an exercise in frustration for the story creators. In this Saturday morning workshop will explore the balance between fiction and history, and how the two can co-exist within one story in a way that appeals to the story’s target audience.

Jacob Boucher has a Bachelor’s degree in Film and Television Production with a Minor in Classical Studies, as well as a Master’s degree in Computer Information Systems and IT Project Management. He currently works at Boston University as an IT services manager. He also teaches blogging and self-publishing courses through the Brookline Adult and Community Education Program.

Under the pen name Jack Badelaire, he has written nine novels and a number of shorter works, mostly in the historical military adventure genre (namely the popular COMMANDO series, as well as Assault on Abbeville, San Francisco Slaughter, and the Western novella Renegade’s Revenge). You can find him online at postmodernpulp.com, where he discusses his writing as well as books, film, and other popular media.