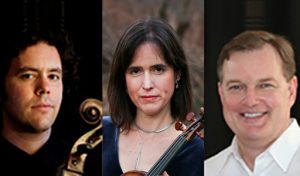 Works by German composers Buxtehude, Biber, and Schmelzer evince the allegorical and philosophical nature of virtuosity. This is juxtaposed with the fantasy and abandon of Italian works by Castello, Marini, and Corelli, as well as the very first works for cello solo by Gabrielli and Jacchini.

When Emily Dickinson died in 1886, she was unknown outside the small circle of her family and friends. Her sister, Lavinia, promised she would burn all of Emily’s papers once she was gone. But Lavinia could not bring herself to destroy the remarkable cache of nearly 1,800 poems she discovered after Emily’s death. Instead she sought an editor, a person who knew and loved Emily, who could decipher the confusing manuscripts and put them into publishable form. Mabel Loomis Todd was that person. Though Emily and Mabel never met face-to-face, the friendship they had built through correspondence afforded Mabel the insight she would need as she and her daughter Millicent Todd Bingham built Emily’s literary legacy.

Julie Dobrow, a journalist and a professor at Tufts University and author of AFTER EMILY, a new biography that weaves together the stories of Emily, Mabel, and Millicent using hundreds of primary source materials, many of which have never before been quoted in published works. Dobrow pored over hidden diaries, long-lost letters, and rarely seen documents. Her work allows readers to hear the thoughts, hopes, and sorrows of these women in their own words—from the unforgettable feuds between Mabel and members of the Dickinson family, to Millicent’s struggles growing up steeped in her mother’s obsession with editing Dickinson’s works, to their own close but complicated connection.

The Summer Salon series kicks off this evening!

Join several storytellers who share true stories from their lives, told live without notes. The evening’s theme is “heat.” Among the storytellers will be Judy Bedell, Peter Eschauzier, Colleen Michaels, and Bill Scannell. J.D. Scrimgeour hosts.

Judy Wang Bedell came to the U.S. from Beijing, China for graduate school and then stayed in the US to live and work. She is a Salem resident and has lived in the city for 24 years.

Peter Eschauzier was born in 1940 in Modjokerto, Java, Indonesia. He grew up in the Netherlands, West Newton, MA, Roslyn, New York, and Switzerland. He served in the US Navy from 1963-68, and then worked as a pilot for many years. He served on the Board of Directors of Historic Salem and was the President of the Grey Eagles, representing the retired pilots of American Airlines.

Colleen Michaels writes poems and tells stories. She directs the Writing Studio at Montserrat College of Art, where she’s been hosting the Improbable Places Poetry Tour for 10 years. Her poems have appeared in journals and anthologies, on the ceiling of the PEM and the stairs to Crane Beach, and on bar coasters under pints.

Bill Scannell grew up in Worcester, MA and attended school there. He graduated from Skidmore College, and, thereafter, Suffolk University Law School. He is married and the father of three children.

J.D. Scrimgeour is the Chair of the Athenaeum Writing Committee.

Please join us on Fridays in July and August for one or more of these special evenings!

Dave Williams will present a retrospective of the history of survey research in political campaigns from FDR to today and how technology and procedural changes have impacted the reliability of modern polling.

Since the founding of Williams and Associates by David E. Williams in 1989 the company has consulted with both corporate and political clients including the campaign committee for Presidents Rupiah Banda (Zambia), Ali Bongo Ondimba (Gabon), Governor William F. Weld (R MA), GTE/Sylvania, Hydro-Quebec, the National Association of Government Employees, the Providence Journal-Bulletin, the Massachusetts Institute of Technology (MIT), Harvard University (Radcliffe Institute for Advanced Study), the US Agency for International Development, and the United States Department of State.

Join us on the lawn for a special Friday evening concert of Puccini, Mancini, and Duke by Boston Saxophone Quartet.

The Boston Saxophone Quartet is a unique blend of musicians who have performed with the Boston Pops and Boston Symphony Orchestra and leading Broadway theaters throughout New England. Their repertoire ranges from Swing, Ragtime, Jazz, The Beatles … all the way back to the Renaissance.

This evening’s program will include:

Dogtown, the abandoned settlement on Cape Ann, has long fascinated historians and artists for its stories and its geography. According to Professor Carl Carlsen, James R. Scrimgeour’s recent book of poetry, Voices of Dogtown: Poems Arising Out of a Ghost Town Landscape (Loom Press) “comes as close…as anyone has come to capturing the complete essence of Dogtown.” Join Carlsen and Scrimgeour for a tour of Dogtown, past and present, through Scrimgeour’s verse.

After the presentation, there will be a Q&A, followed by conversation and book signing.

Carl Carlsen is Professor Emeritus of English at North Shore Community College and creator of the website Poetry of Places in Essex County www.poetryofplaces.org, which includes poetry and other materials about Dogtown. He is the author of Brickyard Stories: A Lynn Neighborhood and its Traditions (1985) and is currently working on a sequel, Brickyard Stories 2.0.

Dr. James R. Scrimgeour is Professor Emeritus at Western Connecticut State University. He has published nine books of poetry. His latest book, Voices of Dogtown: Poems Arising Out of a Ghost Town Landscape, has just been published by Loom Press. His new book is available at Amazon, Loom Press and bookstores on the North Shore.

This is the story of a 16th-century Italian architect’s profound influence on the development of American architecture and specifically that of Thomas Jefferson.

The Italian architect Andrea Palladio (1508-1580), considered one of the most influential architects in history,  was clearly a strong influence in the development early American architecture—including the Jeffersonian style reflected in the Athenaeum’s Colonial Revival building by the architect Rantoul.

Victoria Sirianni is a consultant to industry and universities. Having served in a variety of positions at MIT for over 30 years, her last position was as MIT’s Chief Facilities Officer where she was responsible for the management of its physical campus and shepherding its $1.5B second major building program. Subsequently, She served as the Senior Vice President for Operations at Thomas Jefferson University.
She has been both a Palladio and Jefferson enthusiast for a lifetime.

Celebrate reading and writing with us at the 10th Salem Lit Fest! 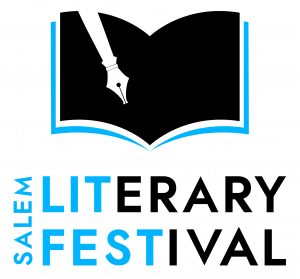 Opening  Keynote Speaker on 9/20: Whitney Scharer, author of The Age of Light.

General admission to author readings and family programming and activities is free and open to the public. Reserved seating is available to Individual Patrons and Corporate Sponsors. 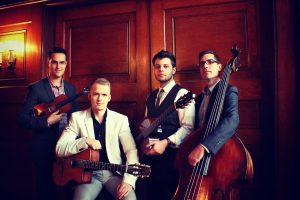 Jason Anick is one of the youngest violin professors at Boston’s Berklee College of Music and is “a rising star in the world of jazz violin and mandolin” (Downbeat Magazine). Anick has shared the stage with a wide array of artists including Tommy Emmanuel, Hamilton de Holanda, John Sebastian, Stevie Wonder, Delta Rae, and Girls, Guns and Glory. His performances have brought him to China, Europe, and Japan. He has been featured at renowned venues including the Montreal Jazz Festival, Blue Note, Smalls Jazz Club, Scullers Jazz Club, Yoshi’s, Iridium, TD Garden, Regattabar, NPR, and The Late Night Show. Jason is a proven leader in the ever-growing contemporary string world.

Last year marked the release of their latest album, “Rhythm Future Quartet and Friends”. While maintaining the effervescent lilt, virtuosic musicianship and adventurous musical leanings of previous recordings, “Rhythm Future Quartet and Travels” (picked as one of the best jazz albums of 2016 by All About Jazz and the Huffington Post), RFQ and Friends brings vibrant new colors to the mix. JazzTimes Magazine stated, “RFQ and Friends is packed to the gills with feeling and remains consistently dynamic, full of virtuosity and swing.” With its arresting blend of Hot Club of France styled string jazz, Brazilian and East European idioms, original compositions and hints of classical music, the album marks a significant moment in the growth of a continually evolving ensemble. The Rhythm Future Quartet’s increasing popularity is laudable: The quartet’s version of Django’s “Minor Swing” has over 5.6 million views on YouTube, and their video clip of “Bushwick Stomp” from Travels has over 3.2 million Facebook views.
Read more
Categories: General Programs
Oct
10
Thu
Jean Trounstine: Sentenced to Literature
Tickets
Oct 10 @ 7:00 pm – 8:30 pm 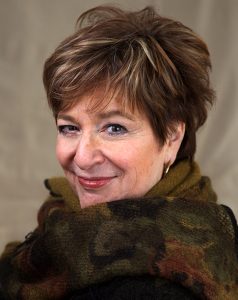 Not all people who commit crimes need to have the book thrown at them—some are reading to get out of criminal activity, and finding that literature helps them change their lives. This presentation will include how Changing Lives through Literature (CLTL) came to be, how it has grown and developed for people on probation (and also, behind bars). We’ll explore the rationale for a democratic reading/discussion group where professors, judges, probation and correction officers talk to each other about literature. CLTL has become a model in Massachusetts and has been duplicated elsewhere across the country. Finally we’ll cover funding, stats, and best of all, stories from the participants.

Jean Trounstine is an activist, author and professor emerita at Middlesex Community College in Lowell, Massachusetts, whose most recent book is Boy With A Knife: A Story of Murder, Remorse, and a Prisoner’s Fight for Justice (IG Publishing April, 2016). It explores the true story of Karter Kane Reed and the injustice of sentencing juveniles to adult prisons. Trounstine worked at Framingham Women’s Prison for ten years where she directed eight plays with prisoners. Her highly-praised book about that work, Shakespeare Behind Bars: The Power of Drama in a Women’s Prison has been featured on NPR, The Connection, Here and Now, and in numerous print publications here and abroad. In addition, she has spoken around the world on women in prison, co-founded the women’s branch of Changing Lives Through Literature, an award-winning alternative sentencing program featured in The New York Times and on The Today Show, and co-authored two books about the program.