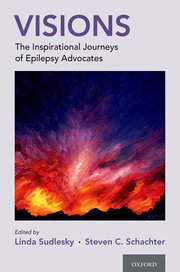 ***Due to a family medical emergency with one of tonight’s presenters, this talk is postponed. ***

A new date will be announced soon.
Join us for a heartening account of people living with epilepsy, a condition that carries its own historically stigmatized reputation.
Instructional designer Linda Sudlesky, M.Ed. and neurologist Steven C. Schachter, M.D. share their stories of epilepsy advocates who have been impacted by their work to improve the lives of people with epilepsy. Seven years of research and interviews with nearly fifty advocates resulted in their book project, Visions: The Inspirational Journeys of Epilepsy Advocates.

Linda Sudlesky, a Salem resident, is an Instructional Designer at the University of Massachusetts Boston, an artist, an advocate, and a person with epilepsy. She also works as a community support staff and advocate for people with intellectual disabilities. She has done community education on epilepsy, serves as a volunteer for Citizens United for Research in Epilepsy (CURE), as a Massachusetts Council member for EFNE, and board member for Hidden Truths, an organization which is dedicated to engage and empower individuals impacted by invisible and visible disabilities through the arts with a focus in epilepsy.

Dr. Steven Schachter is the Chief Academic Officer for the Consortia for Improving Medicine with Innovation & Technology (CIMIT) and a Professor of Neurology at Harvard Medical School. He has published over 250 articles and chapters and edited or written 35 books. He is the founding editor and editor-in-chief of the medical journals Epilepsy & Behavior and Epilepsy & Behavior Case Reports.

Sudlesky and Schachter are donating all of their royalties from Visions to organizations which fund epilepsy research.

PLEASE NOTE: The event will be on Zoom. Event link is sent 30 minutes before program start.