Cost:
$20, members | $25 non-members | $12 students with ID. Free for children under 17.
Contact:
Salem Athenaeum
978.744.2540
Email
Event website
General
Following on their highly successful program of Ravel and Webern from last season, the Fin de Siècle Quartet returns for another exploration of music dating from a specific time and place but exploring different possibilities. This time, the place is the United States and the time is the last decade of the 19th century, with a look at three composers who combined the vernacular and classical traditions in very different ways. Performing on gut strings, the Fin de Siècle Quartet will allow listeners to hear the warmer string sonorities familiar to musicians and audiences from the time.
The program opens with Charles Ives’s youthful and delightful string quartet #1, a collage of hymn tunes with influences from barn dances and other American vernacular music. The players will introduce the quartet by playing some of these tunes. Composed while Ives was still a college student, the work is nostalgic as well as original, witty as well as moving.
The quartet will then play and discuss examples of Scott Joplin’s music, touching also on Joplin’s short but fascinating life, a story that remains little known even as his music has become known to millions.
The program ends with Dvorak’s beloved “American” string quartet, which the Czech master composed in Spillville, Iowa in 1893, on a break from his duties running a conservatory in New York. Dvorak’s sojourn in Spillville, amidst a community of Czech settlers, was one of the happiest and most productive of his life: in a single summer, he composed the “New World” symphony, this quartet, and a string quintet.

The Fin de Siècle Quartet takes its name from the French for “end of the century” as a reflection of its focus on repertoire from the decades before and after the end of the19th century. One way the group honors this time period is by performing on gut strings, which produce a gentler and richer sound than the steel strings that came into wide use after World War II. The Fin de Siècle Quartet is composed of violinists Katharina Radlberger and Sarah Ibbett, violist Karen McConomy, and cellist Jennifer Morsches. 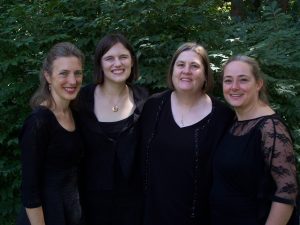