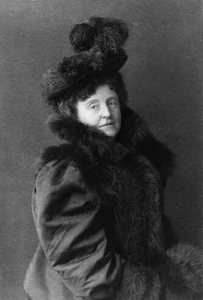 Frances Hodgson Burnett, born in Manchester England, was an imaginative story-teller from her youth on. While still a teenager, she was able to use this ability to help her family financially. As an adult, her stories allowed her to afford a rather lavish lifestyle, yearly transatlantic trips, and multiple residences on both sides of the Atlantic. Burnett married twice, but both her marriages ended in divorce.

Burnett may be best known for her creations of Little Lord Fauntleroy and The Little Princess, probably as the result of their successful dramatizations. However, Burnett also wrote top selling romantic novels at the turn of the 20th century. Her first novel was entitled “That Lass o’ Lowrie’s” (1877) and the final one called “The Head of the House of Coombe “(1922) and “Robin”, a sequel (1922). Burnett’s novels sometimes reflect her cosmopolitan outlook and her interest in history, are sometimes autobiographical, and sometimes reveal supernatural themes (“In the Closed Room”) and religious themes (“The Dawn of Tomorrow”). Burnett became a US citizen in 1905 and settled permanently on Long Island in 1907 where she died.

Come to the Athenaeum’s discussion of Burnett, Monday, January 8 at 7 pm and see whether our more skeptical age can find pleasure in her romantic tales.