Recently there have been numerous press reports regarding the disappearance of up to 3 billion birds from North America. These declines have been caused by multiple factors, and identifying ways to reverse these trends are also varied. In this presentation, which will address bird population changes at continental to local scales, Dr. Jon Atwood, Director of Bird Conservation at Mass Audubon, will explore regional conservation efforts and ways that you can help. 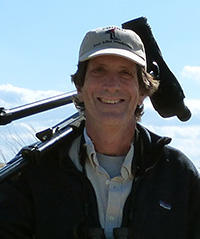 Jon Atwood is Director of Bird Conservation at Mass Audubon in Lincoln, Massachusetts. He has been a practicing ornithologist and conservation biologist for over 40 years, specializing in integrating behavioral studies of rare and endangered bird species with habitat conservation planning. After completing his Master’s and Doctoral degrees in southern California, he moved to the East coast in 1986. While working at Manomet Bird Observatory (now “Manomet”) during the early 1990’s he collaborated in the analysis of the first 30 years of Manomet’s land-bird banding effort, spearheaded federal protection of the California Gnatcatcher under the U.S. Endangered Species Act. He also led a long-term study of factors affecting Least Tern colony site selection, and contributed to early studies of Bicknell’s Thrush in New England. From 1998-2011 he directed the Conservation Biology Program at Antioch University, New England, taught classes in Ornithology, Ecological Research Design, and GIS, and mentored over 70 graduate students working on various wildlife studies. During 2011-2013 he was Science Director at Biodiversity Research Institute in southern Maine. He has worked for Mass Audubon since 2014.

PLEASE NOTE: This event will be held online via Zoom.
Registration closes 45 minutes before program start.
Event link is sent to all registered participants 20 minutes before start.