The Hidden Art of Endpapers
1705 to the Present

Endpapers can be purely decorative, such as marbled or floral-patterned papers, or they can be thematically tied to the text. Sometimes they provide information such as maps or family trees. Occasionally, they advertise a publisher’s forth-coming books or even hotels or hats!

This exhibit is a tour under the covers of the Salem Athenæum collection.

Marbled papers were the first decorated endpapers. Originally, endpapers were made only of white paper or vellum. Marbling may be defined as the floating of colors on a liquid to form a pattern and then capturing that pattern by placing a sheet of paper on the floating colors and lifting it.

The History of Marbling or Cloud Art

This mostly secret method of decorating paper originated in the Far and Near East. The first Europeans to encounter the craft of marbling were travelers to Turkey and Persia in the later 16th century. Intrigued by this “cloud art” or “ebru,” they sent home samples and descriptions of how the paper was made.

It took only about 25 years, until around 1600, for marbling to filter into Europe by way of Mediterranean trade routes. It was practiced initially in Germany and in France, which was the first European country to use marbling for books.

Marblers have always guarded their knowledge carefully and maintained it as a trade secret. In the guilds, which were the main centers of education and industry, each apprentice was trained in a separate part of the work and was taught to make only one or two of the patterns so that he wouldn’t have enough expertise to set up a rival establishment.

The Golden Age of Marbling

Throughout the 18th and early 19th centuries, marbled papers were the endpapers of choice for finer bindings. Following the lead of France and Germany, other European countries began marbling papers around the mid 18th century. England and America took up the craft towards the end of the century. By the first quarter of the 19th century, the English, along with the Germans and French, were acknowledged as the Western world’s greatest marblers.

Late 19th Century to the Present

Towards the end of the 19th century, marbled papers of all kinds were used in fine bindings. More and more were machine-made and less and less were the authentic product. This machine-made marbling was used in highly polished calf bindings and in sets with half morocco bindings. The papers were often marbled with gold veins.

By the 1930s, only a handful of professional marblers were active in the entire Western world. Today, in a small way, the craft of marbling has revived. Artisans still produce beautiful patterns and still guard their trade secrets.

Handmade marbling and block-printing decorated the endpapers of expensive books of the 18th and 19th centuries, but only the plainest endpapers served ordinary books. Then in the 1830s, the mechanization of bookbinding, with its speeded assembly, made it possible to bind large numbers of the same book at dramatically lower costs. Bookbinders could now pay more attention to book decoration.

Using lithography or letterpress, binders began embellishing endpapers with small repeating patterns. The first of these patterns, in the 1840’s and ‘50’s, were tiny geometrics, often made from printers’ ornaments. The designs were crisply defined and in clear colors. 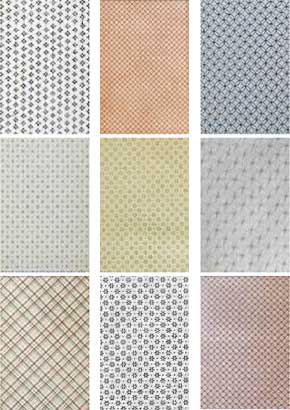 Like endpapers, playing card designs were small-scale, one color designs which were secondary in importance to what they decorated. The small geometrical pattern used as endpapers in a book about whist was also used for the backs of playing cards. 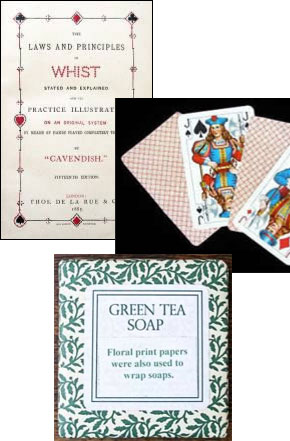 During this period, binders also used endpapers in flat, solid colors, and in the following decades they appeared with increasing frequency. These “Stone” endpapers were made either by adding dye to the pulp to make color-permeated papers, or by color-coating one side of the finished paper as it was drawn onto rollers.

The color-coated paper came in an array of colors, from the respectable brown of many Victorian books, to deep blues, soft greens and Necco wafer pastels. Occasionally these were polished to a porcelain finish to embellish mid-century gift books. 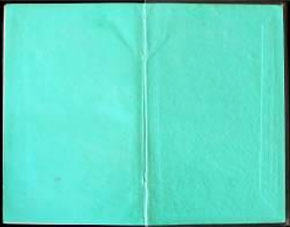 Only towards the end of the 19th century, did endpapers reflect the subject matter of their books.

Some thematic endpapers portray characters or present intriguing scenes from the text. If successful, these glimpses whet the reader’s appetite. Other thematic endpapers depict the locale of the book, establishing the atmosphere and mood as does the overture of an opera.

Many successful pictorial endpapers make imaginative use of the two page format. Some are symmetrical, some show a procession of characters, some use repeating motifs, and some feature a pathway which leads, as it were, into the text. Occasionally, the front endpapers and back endpapers differ, the back endpapers adding more information or else serving as a curtain call and goodbye.

Some of the finest book artists, like Walter Crane and Jessie Wilcox Smith, unified the designs of the endpapers, cover, title page and illustrations, so that they complemented each other and corresponded with and enhanced the book’s contents.

The endpapers pictured in this part of the exhibit depict a variety of themes, from earthbound to celestial.