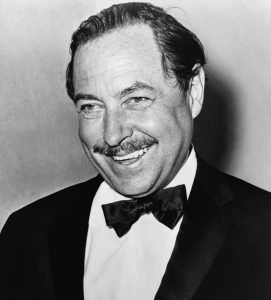 Last fall, we considered the plays of Arthur Miller, one of the two greatest American playwrights of the mid-twentieth century. In this fall’s 7-week course, we will examine the work of the other great playwright of this period: Tennessee Williams. While Miller’s realistic plays were rooted in the industrial North, Williams’ expressionistic dramas seemed to be thoroughly Southern.

Upon closer examination, we discover that Williams’ plays constitute a much broader critique of post-war America with its ambivalent attitudes towards class, success, sexuality, and outsiderness. As a technical innovator, Williams was the true master, as even Miller had to concede. Through an examination of his life, his recorded conversations and published essays, we will also learn how Williams transformed his life experiences into bold dramas; how he felt about the American theater in his time, the price of fame, the critical reviews he received, and the filmed adaptations of his works. On several occasions, we will view filmed versions of the plays in class.

Plays to be considered are: